Deciding on new camera gear is always tough and you have to focus on which product is right for you.

I have owned and used on camera monitor-recorders for a long time. I originally bought a Atomos Samurai when I bought one of the first Red One cameras in Australia. The reason this was a great option to add to the Red camera was because it allowed me record a video stream with matching file names and timecode (to the RAW recording) the Red camera was doing. This allowed more options in post production as well as allowing for playback on set. This was in the very early days of the Red before the cameras could play back the footage. These two features alone were more than enough reason to buy the Atomos.

Since then I have used camera mounted monitor-recorders on jobs for a few reasons and still use them with both my Red Dragon camera and Sony F5 camera and the monitor-recorders have gone ahead in leaps and bounds. You can get these from manufactures such as Atomos, Blackmagic Design, Convergent Design, and Video Devices.

Reasons to use a monitor-recorder

So now how do I choose what I need?

While many people start by looking for a monitor-recorder that fits in a specific price range, I think you should work out what features you need before you consider price. By doing this first you will get a better understanding of the value of the features they offer and how well they will fit your working style and needs.

One of the first decisions should be on screen size. Personally I find the 5 inch models to be a little small so like the 7 inch versions better. But as I shoot with large-ish cameras (Sony F5 and Red Dragon) I can afford the extra size and weight. However, both the smaller units and larger units offer similar features.

Now that you’ve decided what size monitor-recorder you want you need to consider are how important multiple inputs/outputs, signal cross-conversion, and video scopes with image evaluation tools are to you. Depending on your work , you will probably find it useful for your monitor to have a loop-through output so you can pass the signal on to other equipment. This can be either SDI or HDMI. SDI is considered the professional standard, and HDMI is considered more of a consumer standard, even though it can be found on some high-end cameras. If you do opt for a monitor with both HDMI and SDI cross conversion between the two is becoming more commonplace and easier to find and will mean your monitor -recorder will be able to be used on more camera equipment.

Another consideration is screen resolution, most monitor-recorders are based on a 1920 x 1080 HD screen. I would suggest that this should be what you should go for, as 4K and higher resolutions become more common you will want higher screen resolutions to monitor this so by having at least HD will mean you will be able to use your unit longer.

Image Evaluation Tools and Scopes are built into pretty much all units now and give you a great deal of information than a monitor does. So what are the tools and scopes? 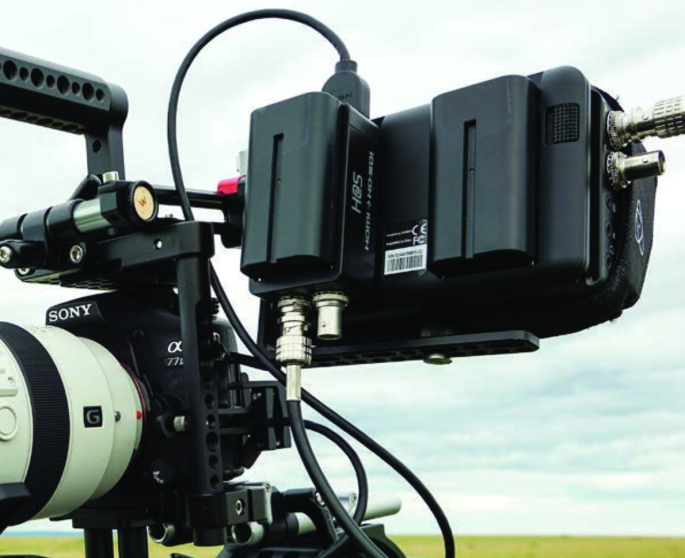 You may not know how to use all these tools and scopes but having the option to use them (after learning how to read them) gives you information about your images that looking at an image itself can’t tell you. For example a vectorscope is the best tool to know your white balance is correct. To check that only takes a second to glance at the vectorscope. All these tools are another weapon in your armoury to ensure you are getting the images you want out of your camera.

I have used Atomos gear for a long time. The backup and support has been great. Another plus is that they are a great Australian company. Yes I am an Aussie so maybe a little biased to them 🙂 , but they are well worth looking at when making your mind up what camera mounted monitor-recorder you need.